Malbec at NMSU's Las Cruces Fabian Garcia
Agriculture Science Center (photo taken 1 July, 2020)
In the following sequence of photos one can see the four ground covers that are being evaluated within the row middles in the Malbec planting at Las Cruces.

Weather and Climate Summary and Forecast

Dr. Gregory Jones, Director of Wine Education, Linfield University in McMinnville Oregon, has released his  latest compilation and report on weather for the western US, including New Mexico. Check out the full report at the link below, and sign up to receive direct emails from him regarding weather and climate that impacts your vineyard, farm or ranch.
Dr.Gregory Jones' Weather and Climate Outlook and Report

Yellow leaves explained...grapes aren't the only ones

The following information is sourced directly from:

Iron, or Fe, the most abundant metal on Earth, is insoluble in oxygen rich environments, which include most soils. That first sentence should provide a clue to the condition of the vines in the photos with yellow leaves…but I encourage you to read on. Iron is also the most abundant micronutrient (a micronutrient is a nutrient needed in small amounts) in grape, and is a part of proteins and enzymes. It is needed to make chlorophyll, but is not found directly in the chlorophyll molecule. Iron is needed for photosynthesis, respiration, DNA synthesis and detoxifies oxygen species. It is found in leaves, seeds and pollen. Because it is part of pollen… think successful fruit set! Iron’s abundance in soil may contribute to inaccurate fertilizer recommendations, especially when leaf tissue samples, covered with soil “dust” are submitted to the lab for analysis.

Near the soil surface, where most plant roots including grape roots occur, oxygen is plentiful, and Fe occurs in the oxidized form Fe+3 (ferric iron). But it is the reduced form, Fe2+ or  ferrous iron, that is soluble and able to be used by plants. Grapevines absorb iron “chelates”, which are, simply put, acidified forms that are more soluble and absorbable (see also: https://en.wikipedia.org/wiki/Chelation#Fertilizers)

After the Fe ions are moved from the soil into the root and xylem, they are transported as inactive Fe3+, and eventually arrive in the leaves and are reactivated to Fe2+ before the leaf mesophyll absorbs them. The protein that aids Fe absorption is sensitive to pH, and enzyme activity is reduced as pH increases (another clue to the yellow grape leaves in the photos). Once inside the plant cell, Fe is chelated again and distributed within the cell. Some of the cell’s iron is stored as ‘ferritin’, but 80% is in the chloroplast. Because iron is part of the chloroplast, when iron is deficient, photosynthesis, that is dependent on functioning chloroplasts and sugar production is sharply reduced. This lost photosynthesis and sugar production could have supported the developing fruit or shoot tips. Consequently, vine growth and yield are reduced and oxidative stress can be evident from excessive absorbed light. This oxidative stress is the reason for decline of leaf chlorophyll…and loss of the normal green color…voilà!

Iron deficiency symptoms include leaf chlorosis, from loss of chlorophyll or lack of its production. This loss of green color or ‘chlorosis’ begins at the leaf margins and progresses to the interveinal area of young leaves, followed by marginal necrosis (death and browning of the leaf tissue) and finally abscission (leaf fall). Lateral shoots can be stunted, and can show pink internodes, and have small chlorotic leaves that fail to unfold. However, Fe is phloem mobile and move from older and senescing leaves. Tendrils and inflorescences can become chlorotic and fruit set is poor when deficiency is severe, as Fe is needed for pollen development.

Leaf chlorosis due to Fe deficiency develops frequently when grapes are grown on calcareous soils. Soils with abundant calcium occur in Burgundy, Champagne, eastern Washington, Hungary and New Mexico. Calcareous soils can contain sufficient Fe, but it is often in other chemical forms such as oxides and hydroxides that roots cannot absorb. A one-unit increase in soil pH can decrease solubility of Fe 1000-fold (see Figure 1). 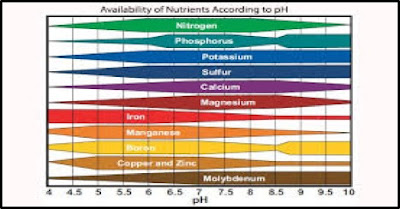 Dr. Keller (see REF. above) points out that diagnosis of Fe chlorosis by tissue analysis is often confounded or is difficult because the amount of Fe determined in chlorotic leaves by tissue analysis is often similar or greater, than levels of Fe measured in ‘healthy’ leaves. This result is partially due to the physically smaller Fe deficient leaves, and the fact that not all Fe measured in a leaf is physiologically active.

The ability of vines to cope with this conundrum of abundant but unavailable, insoluble Fe, depends on where the plant species evolved. Vitis vinifera, the European grape, that evolved in calcareous soils, has the ability to pump out H+ and organic acids from its roots that acidify the soil and causes Fe to become soluble and ready for uptake. Vitis labrusca , think Concord, on the other hand, evolved mostly in acidic soils and do not have this level of “acid pump” mechanism capability in their roots. This H+ release “strategy” works only for species that evolved in high pH soils.

As further explanation…the vine takes up bicarbonate, HCO3-, which comes from the CaCO3 in calcareous soils. The bicarbonate affects the cell’s apoplast (the apoplast is the space outside the plant cell…between plant cells) and the apoplast is inhibited from converting Fe to its plant active form. This results in the Fe being “locked up” in the apoplast, it does not enter the leaf mesophyll, and cannot be metabolized. Finally, without Fe metabolism, the leaf turns yellow (remember that Fe is part of the green chloroplast and without it …there is no green, or much reduced green color). More specifically, there is yellowing between the veins (take a look at the photos to see evidence of this) of young leaves and eventually the whole leaf whitens. Leaves continue to signal the roots to take up more iron…and the total leaf Fe concentration is actually increased while the leaf is yellowing!

This “iron-chlorosis” or “lime-induced” paradox is common in own-rooted Concord vines that you can see in the photos. Such V. labrusca type vines prefer soil pH closer to 5.5…while many New Mexico soils range from 7.0 to 8.5. But the condition should more accurately be referred to as “bicarbonate-induced” chlorosis. Compacted and water-logged soils can exacerbate the problem…but the latter are not common in New Mexico vineyards.

Although rare, Fe toxicity can also cause oxidative stress, reduced chlorophyll and result in chlorotic leaves. However, Fe toxicity is very rare, typically occurs on acid soils, and/or as a result of excess application of foliar nutrient sprays…from incorrect applicator calculations.

Yellow and pink leaves on Vitis labrusca...what is going on?

Vitis labrusca with yellowing leaves on its shoot tips. 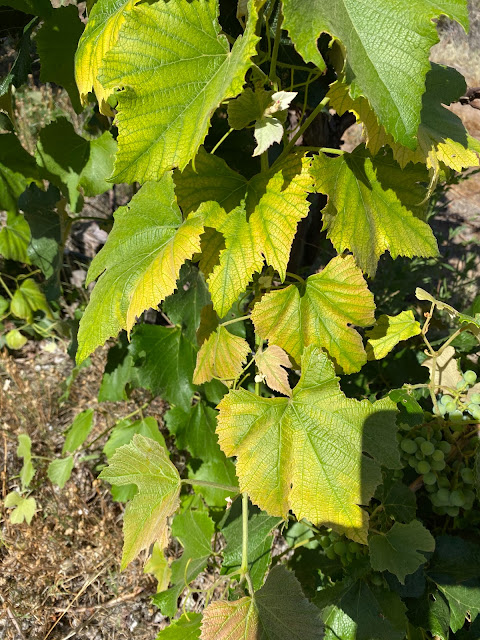 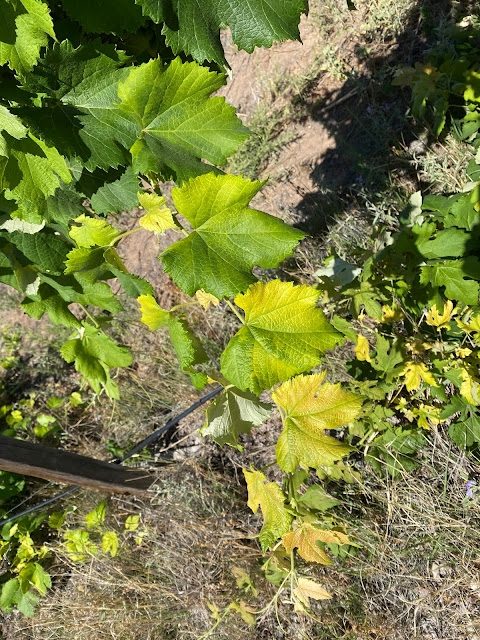 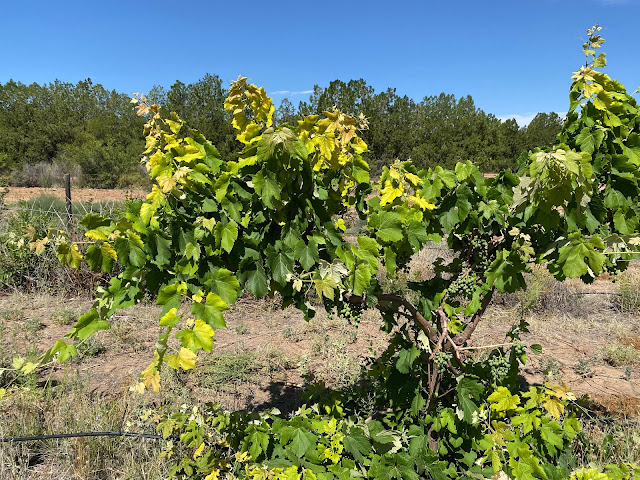 Weed control in a desert vineyard

The following photos were taken at Santa Ana Pueblo vineyard June 23, 2020. All rows in the block were treated with the pre-emergence herbicide Chateau (flumioxazin), that has some post application activity on very small weeds (< 2 inches). This application occurred in early spring, timed to coincide just prior to some predicted rainfall. Rain is required to move the material into the soil where germinating weed seeds are located. The applications, at the labelled rate of 2-6 qts/acre were tank mixed with the adjuvant: "GROUNDED" that is available from Gemplers. After some timely rains...predicted prior to the application, the weed control was excellent. Again, the rainfall within a couple days of application are crucial for the material to be effective. Notice the difference in weed control evident in the side by side rows. The row on the left, with tumbleweeds Russian thistle (Kali tragus) present, was 'missed' by the applicator and thus received no herbicide treatment. The adjacent row on the right, was treated with the flumioxazin herbicide. The weed control is visually evident and obvious...as you can see by the lack of the Russian thistle in the treated rows...on the right hand side in the photos.
- June 27, 2020 No comments:

Vines in Recovery and Rehabilitation

June 17, 2020: A sequence of photos from Santa Ana Vineyard north of Bernalillo. Starting from the top...the photo was taken looking north between two rows of Pinot Meunier. Notice the vigorous and crowded vegetative shoot growth? In the next photo one can see a single vine as we move closer towards the canopy. The third photo reveals the reason why there is so much vegetative growth...and finally, the fourth photo is a close-up within the a single vine's canopy. Notice the dead spur that was left at pruning? I was intended to give rise to two shoots, one from each of the "count buds" that the pruners left for this season. But, as we know...after those shoots budded out and began to grow, a late frost occurred, in mid-April that killed them. All that remains of them is the dead spur...but at the base of the spur, notice that there is about 4 non-count buds that have burst and are giving rise to shoots. One of these shoots appears to bearing fruit. So...the vines will have a crop after all. But it will likely be smaller and ripen later relative to a 'normal' crop that would have been borne on the primary shoots.

The winter damage evident this spring that is manifesting itself now in New Mexico vineyards, especially those in the northern 1/2 and eastern 1/3 of the state, may have ocurred last fall. Most growers I have talked with remark on the sudden swing, from moderate temperatures to temperatures well below freezing in the latter half of October 2019. Take a look at some temperatures recorded at four New Mexico sites: Farmington, Los Lunas, Portales, and Las Cruces. Note the temperature or diurnal swing in temperatures on October 31st at each of the sites. Portales recorded a low of 11 degrees on that date, after a high of nearly 60 degrees Fahrenheit. 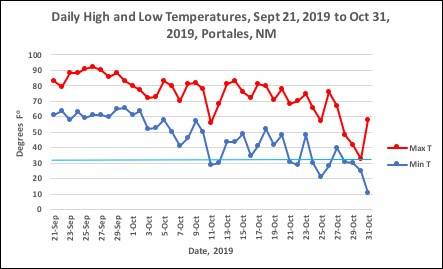 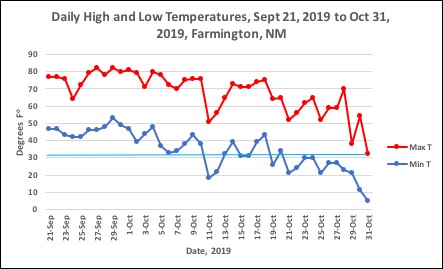 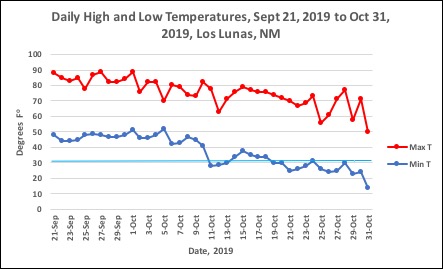 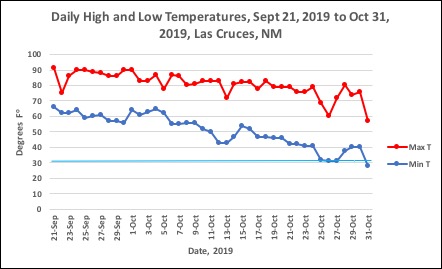